Second in the Fig Study series

I know...I said I would take photos of the process this time.  I just have so much fun I forget.  Third times the charm???? I have the canvas now for the third in the series.  I'll try to do better with the camera this time.

This second piece is called Figs of Gold.  The background is hand dyed fabric, the figs painted with metallic paint.  The shading is pen and ink. And here it is!


Figs of Gold - the quiltlet﻿ 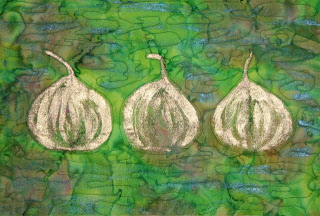 Figs of Gold - stitched on canvas 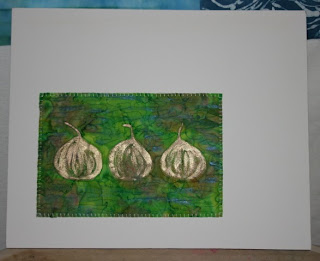 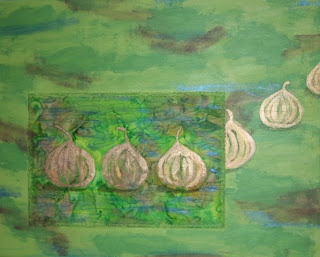 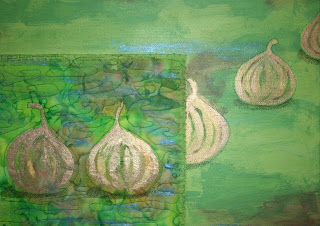 Figs of Gold - Detail 2
(This one looks a bit different because I had to turn off the flash. The reflection was wiping out the details. I wanted to carry through the stitching around each fig so the ones on the canvas are "stitched" around with pen and ink.) 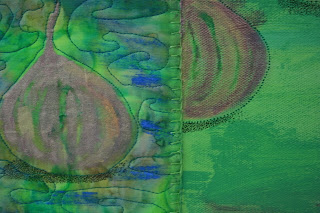 ﻿Now...onto the third in the series!!!  Here's hoping I remember the photos this time!
Posted by Unknown at 4:50 PM 1 comment:

Just received a link to this and HAD to share it with you all.  I think it comes under the heading of art.  What about you?

http://www.youtube.com/watch?v=HSKyHmjyrkA
Posted by Unknown at 4:31 PM No comments:

Time has not be totally wasted however. I've started on a new project that I am quite pleased with.  I was inspired by a couple of techniques a friend shared with me.  I modified them a bit, combined them and found that I really like the results.  The origianl idea is to use this technique for my individual manhole cover projects but I wanted to try it out first to see if it would turn out like I envisioned.  So, I had a series of little quiltlets that I had done for a class. Why not try it out with those and see what happened???

So here is my Fig Study series as I begin to complete them with these techniques. I was so excited and having so much fun that I didn't take photos of each step (drat!!) on the first one but I'm trying to do that on the second one. I do have one confession.....it was difficult making that first brush stroke with the paint onto the fabric!  But I'm glad I did!

First is the branch with little figs growing on it. It startes with the original quiltlet. 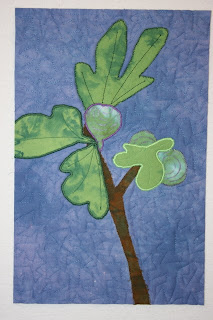 ﻿
Then I stitched it to the canvas (didn't get this photo).  Next I mixed acrylic paints to get the color I wanted and then painted the canvas.  Also extended the branch and the tip of the leaf. (I did later adjust the color on the leaf tip....looks much better later on.)
Fig - Branch (stitched on painted canvas) 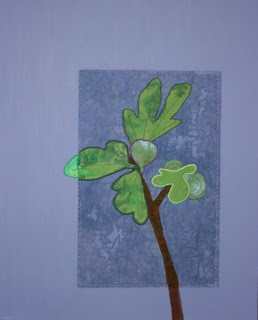 ﻿Next I painted with acrylics to add an additional branch and leaves.  All branches and leaves wrap around the canvas on the sides as well.
Fig - Branch (completed) 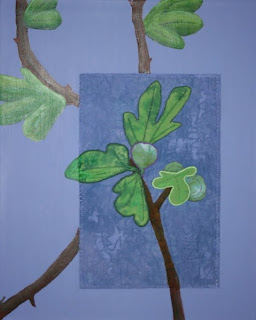 ﻿One last step.  I added shading with pen and ink on the fabric as well as the painted leaves and branches. Just making little dots with the pen and ink. Here are a few detailed photos.
Fig - Branch (details of pen and ink shading) 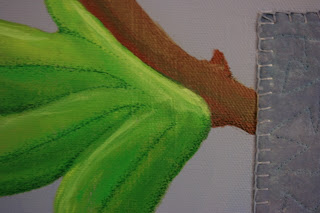 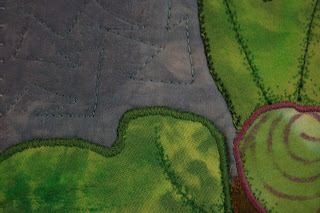 ﻿
So, that's what I've been up to lately. I just stitched the next quiltlet onto canvas and when that one is completed I'll post the photos of the steps on that one.﻿
Posted by Unknown at 10:34 AM 2 comments: