I can hardly believe it has been so long since I posted here.  Life has taken some major course changes and quite a few curve balls have landed in my court.  One was....we moved to another state! After we arrived I began setting up my new studio. It was really scary because I could not find this piece anywhere! Only recently did I just happen upon it when searching for something else! OH HAPPY DAY!! Could I have started over...yes. But I very carefully picked the fabrics for the background on this one.  All that was already done. All I had left to do was the hurricane. It would have always been second best in my eyes because many of the original fabrics are one of a kind and no remnants are left! Whew - tragedy averted!!

So here it is. My fourth and final piece for Voyage 2015 - Abstracted Nature for which I chose the series theme of "Forces of Nature."  For this piece I chose several circular motifs from my won surfaced designed stash. Some are stamped, some are resists and some are sunprinted. I felt they provided the continuity of the circular motion of the hurricane in the Gulf of Mexico. As a native Texan...this is not a stretch for a concept in this series! The "land" fabric is a pounded fabric which I felt had the beautiful look of a topographic map.

The hurricanes are unstoppable and often seem to have a mind of their own. Just when we think we know
the direction they will take and where landfall will be...it can change and head along a totally different path. Sometimes that is for the better but other times that change can cause widespread destruction. This lack of predictability is why I chose the title "Winds of Change" 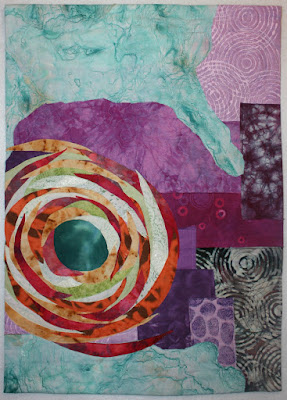 So now all four of the series are completed. Since it has been a while since I posted the previous three (which I had completed in March of 2015! - a great start interrupted) I thought it would be fun to post all four of them as a photo collage.

FORCES  OF  NATURE
Over the Edge, Fire in the Desert, Danger Below, Winds of Change 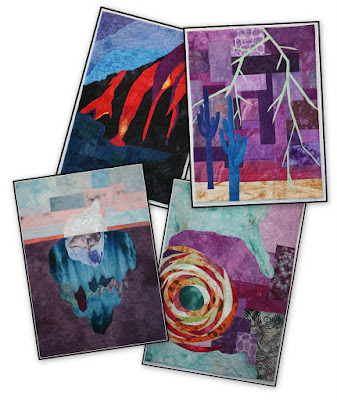 Of course all this means I'm starting behind for 2016 but I think I'm up for the challenge!!