In Sky-Is-The-Limit group the most recent theme was "Inspired By". I was inspired by Victor Vaserely. This was a significant moment in my artistic journey because it was the first time I FULLY realized just how much I appreciate other kinds of art!! I saw a presentation of his work (online) in an old church. The juxtaposition of pop art on ancient stone walls was so intriguing. Then I found I loved his work on its own. Found his two zebras next. Now I do love black and white so these were especially delightful to me. Then I found Markab which he did about 1956 or '57. It isn't as much of an optical illusion as some of his other work but it grabbed my attention big time. So I decided to render it in fabric (at least as much of it as I could in 12"X12"). I've wanted to do this one for a few years. In fact...had already started it and got distracted by other things for a bit. But this theme afforded me the opportunity to complete it and enjoy it all over again. Markab in Arabic means "something to ride". And since finding Vaserely opened up a whole new vista for me, I titled this piece "Enjoying the Ride". As for the process, let's just say I'm extremely glad someone invented those really sharp and tiny scissors!! The white fabric was stitched onto black Kona and then trimmed according to how much black was to show through. Required a bit of patience but I'm happy with the results. It still needs a binding (which will be in black Kona) but at least it is done enough to post. 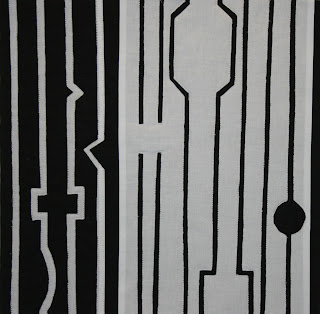 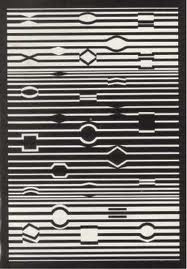 Still working on catching up on several projects but at least this one is MOSTLY done and I'm ready to move on.