Well, FINALLY I'm getting back to my fractured flower project. Got the pieces with the adhesive on the back and then cut out. Started placing them with the placement map and found out is was much more difficult than I had thought it would be! But, we soldier on!!

After just a few pieces are adhered it still doesn't look very promising I must admit. I think this piece was more difficult because the background piece for this quadrant didn't cover the whole picture back.....just the areas for the background of the picture. Also, this is on some light interfacing and for the rest of them I will use a light muslin from the beginning. Anyway, here it is in all its glory! 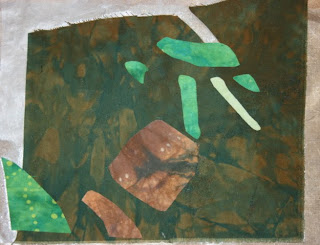 Got a few more pieces on and I could start seeing how it was all coming together. At least enough to encourage me to continue and not run out of the studio screaming!!! 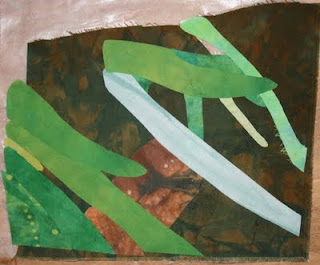 Perseverance paid off in the end. Haven't put all the "finishing touches" on it yet but I think it is looking like the picture. OK, at least it is recognizable as a flower now!! The size difference I think is partly because of the angle I took the picture and also because the fabric one has the seam allowance added on to it. 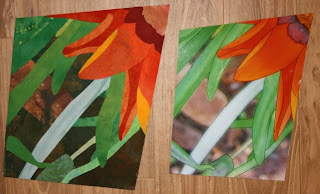 Now on to the other pieces!! After finishing one, I did learn a few things I'll do differently on the next one and see if it makes a difference. Mostly it takes some concentration to be sure it is built up from the back. Now that I'm on a roll I'm actually enjoying it.

Playing with Wil - the final chapter

OK, the final chapter for this visit anyway. Just returned from dropping her off at the airport. But yesterday, after coffee, shopping, shopping, shopping and lunch -- we came to the studio to play some more with the gelatin. This time we took it out of the container and broke it into pieces which we laid on a drop cloth. Then we dabbed paint onto the broken up gelatin pieces and pressed the fabric onto the painted pieces. Another look completely. I especially like the areas where holes had formed in the gelatin.

Here are the three I did: 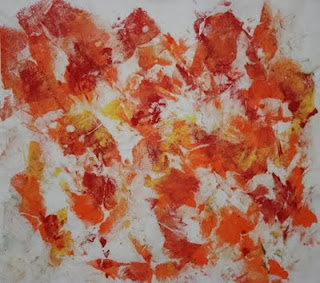 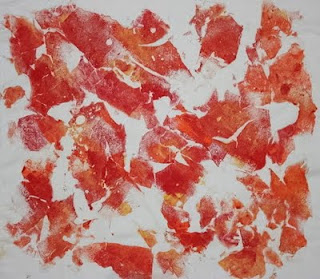 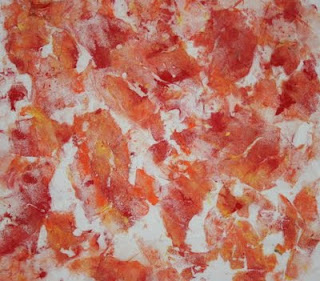 Now I have to play all alone for a while. (sniff sniff). Hopefully I'll find SOMETHING to do....lol!!
Posted by Unknown at 1:19 PM 3 comments:

We had so much fun with discharge yesterday we decided to do some more today (after all, we found some new and different clothes pins that were crying out for some experimenting!!) Below is the fan folded Black Kona with the bleach starting to act on it. 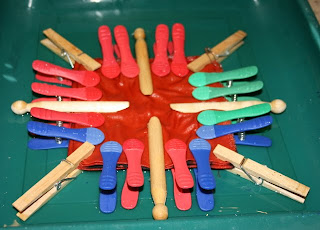 This is the completed piece!! 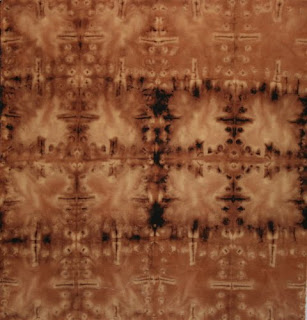 Then I got out all my Twixits and we did some clipping with those and then discharged it. 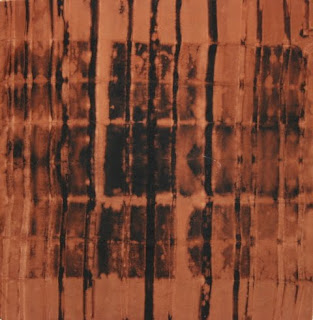 I liked my knotted piece so much yesterday that I wanted to do a bunch more (I obviously forgot how difficult it was to untie the wet knots!!!) Same bleach, same Kona black and yet SOOOOOOOOO different that the strip I got yesterday. There was something going on that caused us to ask several questions and later today we did a test. I'll let Wil tell you all about that on her blog. Probably tomorrow check it out. Right now we are dead on our feet!!! She has already gone over to the house to take a break before dinner! But here are my strips from today!! Needless to say.....they will be put together in some form to make a quilt!!! 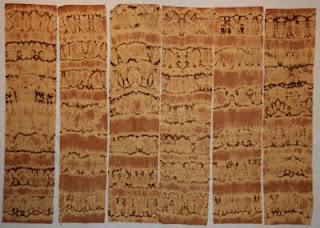 That's it for today, I'm beat and hopefully my husband will remember to bring home dinner!!
Posted by Unknown at 5:14 PM 2 comments:

Some fun from today's play time

OK, so you have seen my lino cutting of Tallinn. Before I started the "official" piece I made a practice piece just to be sure how to use what tool to get which look. Below I printed the lino cut with brick red paint. Then I used artist chalks to color it. I'm in love with it actually. TONS of fun!!!

Wil and I were shopping yesterday (what else?!) and at the shopping mall we ran across several very interesting plants. Feeling like some sort of covert operation - I "liberated" a few of them and we used them in some more gelatin printing. Below are the ones I made. The left picture is the one with the plant on the painted gelatin and the right ones are from the paint left after taking off the plant. 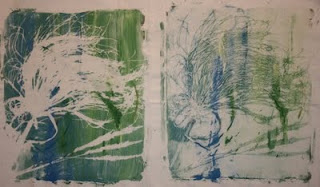 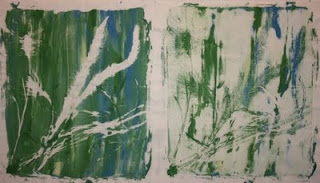 This is the other drop cloth made from putting the used plants on fabric and with muslin on top of them, I brayered them to print the paint remaining on them. 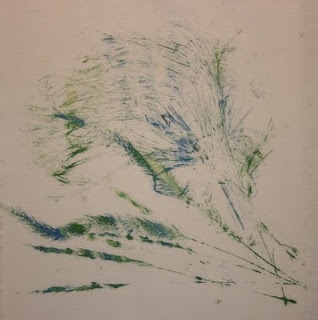 Now, as long as no one got my liscense number.....we might pick up some more on Friday!!! Plant life everywhere -- BEWARE!!! Actually, we decided we are extending and enhancing their life cycle by immortalizing them in art!!! (Hey, that's my story and I'm sticking to it!)
Posted by Unknown at 5:03 PM No comments:

Before Wil arrived I bought 5 yards of black Kona so we could play discharge! So, all the following discharge is done with bleach on Kona black, rinsed in plain water, then soaked and rinsed in Anti-Chlor, washed in regular laundry detergent and put in the dryer then ironed.

This one is all scrunched up and then wrapped tightly with rubber bands. 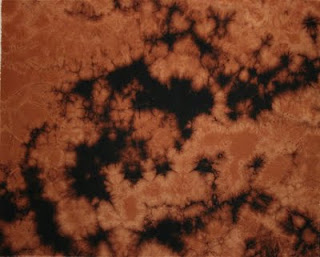 This one I rolled into a loose rope, folded it in half and then wrapped it with many tight ruber bands. Potato Dextrin - Not at all like usine instant mashed potatoes with starch (something I won't ever do again!). We mixed the potato dextrin and applied it to the Kona black in varying thicknesses. The larger crackles are the thicker potato dextrin. It dried overnight and then I brushed on gel bleach (aka - toilet bowl cleanser!). Then followed the usual processing. 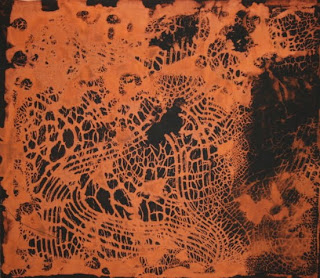 The next one I used apx 8 inches and the width of the fabric. Then I tied it in a series of knots down the length of the piece. The tied part is easy enough..........undoing it when it is wet is something else again.....and I have the aching fingers to prove it! Still........gotta LOVE the results! 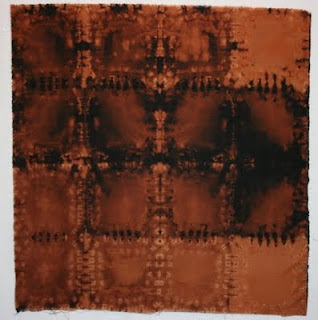 Planning to do more this week so stay tuned.
Posted by Unknown at 5:46 PM 4 comments:

OK, so I know it took me a while but I finally completed the second part of lesson 2. I had saved the cover to this magazine for a long time because I LOVE it! Didn't know what to do with it but I always knew it would end up as a piece of something I would do. Only bad part -- all the writing on it. So, knowing it was Tallinn, Estonia, I googled Tallinn and found the exact same picture. Here it is -- the inspiration for this lino cutting. 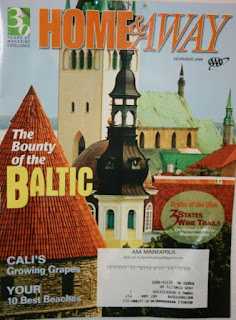 After printing the picture in black and white, I took it to be enlarged so I could cut it on a 12" X 12" piece of lino. Then I traced it onto a page protector so I could reverse it. I wanted the final print to look like the photo - not backwards. This also helped me decide which lines to leave in and which would not work out, etc. (for example.....some buildings now don't have the chimney they used to have!! LOL!!) 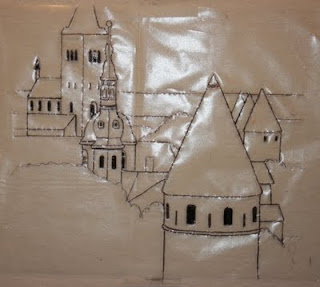 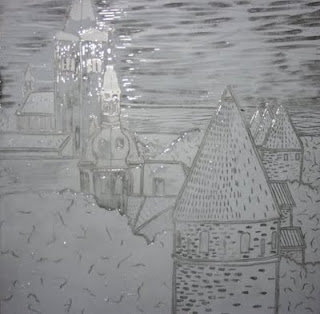 And here it is printed on white fabric. Wanted to see just how it would look, to check out if I need to make any corrections, additions, etc. Now I'll be looking to see how I want to add color to the print. So much fun!!! 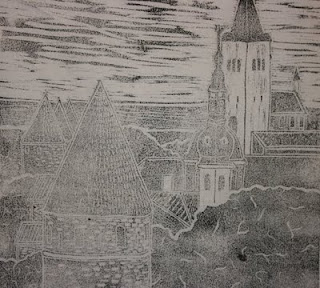