A few of my pieces needed to be professionally photographed to submit for a publication entry.  I spoke with a photographer I know to see if he would be willing to take care of that for me.  We had a rather long coffee and by the end of that meeting I had decided to get all my work photographed!

His name is Shawn Nielsen (Nielsen Studios - you might notice the new link on the right sidebar!!) and he is amazing to work with. It was a great balance of depending on his expertise as a professional and yet having my share of input to the final product as well!  We worked together for a couple of hours this morning and  all my pieces are now professionally photographed!! (except the ones that are currently on exhibit at Crossings Gallery and won't be "home" until the first week in January)  It was quite the experience! AND...I have all the photos in three different formats so they are ready for my website, exhibit/show entries, promotional pieces, etc.  Now when I need to include a detail shot....oh you should see the detail! If you want to see the results you can check out my website in a couple of days.  I'm in the process of updating all my photos there with the shots he took today.  Hopefully next month I'll have the rest of the pieces professionally photographed!

I had made it through OK with taking my own photos for a while but they are nothing compared to this! What prompted me to even consider this?  I had read several articles on entering work to be juried for exhibits and shows AND for presenting to a gallery.  To a one they HIGHLY recommended having them professionally done.  So, as my goal is to enter more juried shows....and my goal for a solo show in 2014, it just made sense to me to go ahead and get this accomplished.

After this experience...and seeing the results...I can HIGHLY recommend Shawn Nielsen if you are contemplating professional photographs of your art.  Contact him and let him know what your needs are and see for yourself how easy he is to work with.


Thanks Shawn for beautiful work! 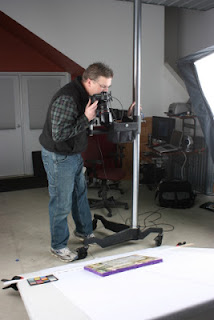 FULL DISCLOSURE:  I am not associated with Nielsen Studios (other than being a very happy client) nor do I receive any compensation of any kind for this endorsement and recommendation.

And the Snow Tree is done!

FINISHED!! Have to say...this is one of my favorites. The theme for this challenge was Snow.  After receiving a foot of the beautiful white stuff. I was inspired both for the technique (snow dyeing) and the subject matter.

I cut the tree out of a white-on-black commercial fabric, I had a stone fabric which made a perfect wall. The snow is cut from all black-on-white commercial fabric. Each piece is individually applied to the background as raw edge applique.  I love the feel of a cold gray day the background gives, with big clumps of wet snow clinging where it can.  I also like how the wavy cut of the woven fabric background gives a feel of the cold winds of winter in the frozen northland.

The front fabric is folded to the back and stitched instead of a usual binding.  I didn't want to break up the tree or distract from it. 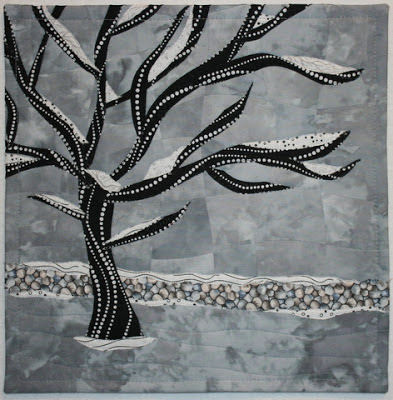 In abundance and just 2 steps out of my door!

Did a snow dyed backing for the gray woven background piece.  Continuing with my addiction to have a backing that goes with the front whenever possible! 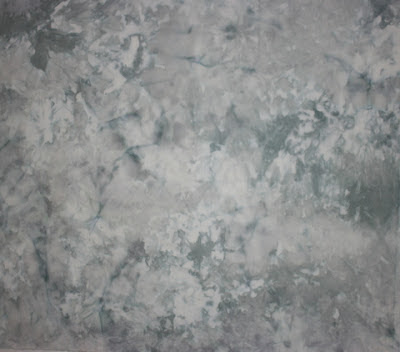 Also did three snow dyed pieces for the Pecans series.  I LOVE them!! And I know they will be very useful to mix in with all the others since I used the same dye mixture.  Also, decided to add a couple of my favorite rusted pieces to the pile of available fabric for Pecans.  Think they might add an interesting bit once in a while.
Snow Dyes 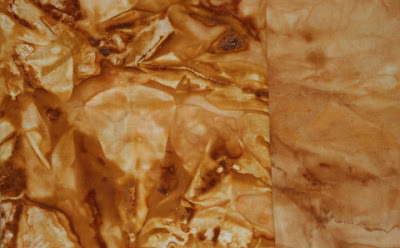 A couple of the online groups I belong to are doing art pieces in a series as part of the challenge for the year.  For one of the groups, Free Spirit Artists, I decided to do a series on Pecans.  This fall my dad died. He was a wonderful man and a great loving dad. And one of his passions was pecans.  They had a HUGE very old pecan tree in front of their house and he even planted a pecan orchard.  He subscribed to magazines for pecan growers.  Oh and he enjoyed eating them as well!!  (something we had in common!!) So, I decided to do this series in honor of my dad.

So far the series will depict the  different stages of the pecan.  1) sapling, 2) a grown tree, 3) mature pecans on the tree limb, 4) pecans on the ground at the base of the tree - ready to harvest 5) a barren tree after all the pecans and leaves are gone 6) pecans harvested and halved, etc and 7) the piece honoring my dad - it will have his photo in B/W transferred to silk organza, pecans, perhaps other photos, and my mom's pecan pie recipe.

Well....I have done a bit on this series already.  Ordered screen prints, cut out templates, etc.  But dyeing the fabrics felt like the project is actually underway.  After a couple of days of dyeing....here are the basic fabrics I will be using in all of the pieces in this series (6 or 7 planned)

They are all dyed in a 6 step gradation.  Here is one of the brown all set up to batch.

And here are the completed dyed fabrics --

Browns (yes I know some of them don't look brown but they are named "brown" something) -  From left to right...Tobacco, Cocoa, Golden Brown and Dark Chocolate Brown 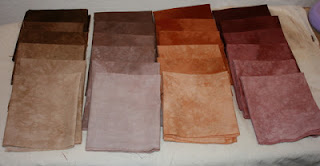 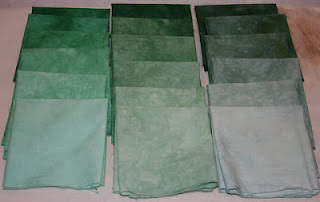 And Blues - Left to Right... Well actually they are so close it is difficult to tell the difference even in person! But I used Cerulean and Intense Blue.  I took these down a couple of gradations because I wanted some light blue sky with "clouds".  I'm very happy with the results. 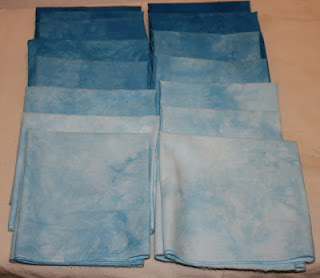 Ordinarily this would be the end of dyeing...however after just completing the snow dyeing for another challenge...I HAVE to do some pieces for this series!! Hopefully I'll get to that tomorrow if not starting some today.
Posted by Unknown at 8:00 AM No comments:

One of my challenge groups has the theme "Snow" for December.  Well.....I mean I HAVE to snow dye the fabric for that one right????  AND we DO have enough snow!!! 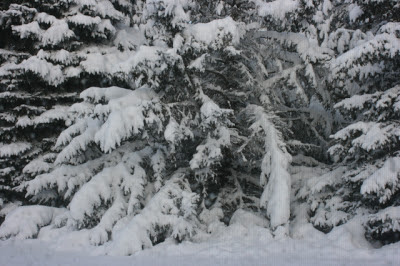 First I have to prepare a place to put the whole snow dyeing process.  I like the melted snow and dye to drip below the fabric so that the fabric doesn't bathe in the dye.  One thing I say...."the right tool for the right job".   I'm so glad I picked up those big tin snips when they were on sale years ago!!!  The metal mesh is for a leaf shield on gutters. 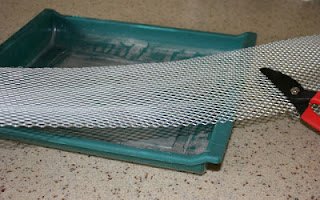 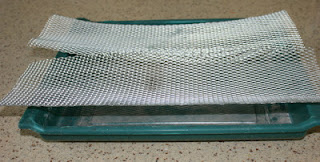 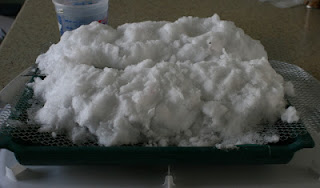 I had mixed up two strengths of #44 New Black from Dharma.  Also added in just a smidge of blue dye in one and a smidge of purple dye in the other for just a bit of contrast.  Then just waited for the snow to all melt.
GOING... 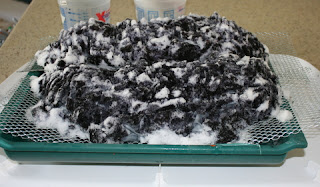 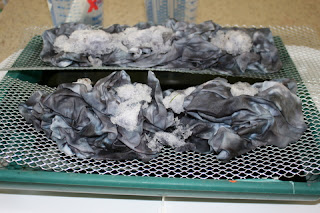 Results side by side 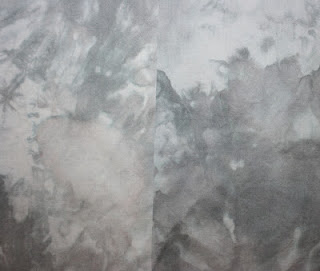 A while ago I had done a woven background like this one with an abstract tree. I wanted to do something very similar for this challenge.  So on to weaving the background.

First I cut each piece to the appropriate size - this time 15"X15". I ironed MistyFuse onto the backs of each of the pieces. Then I use my rotary cutter to slice the pieces into wavy lines.  (NOTE: On one piece, leave one edge in tact to make weaving easier to control) Also...it is important to keep these strips in order so they will fit snugly when woven. 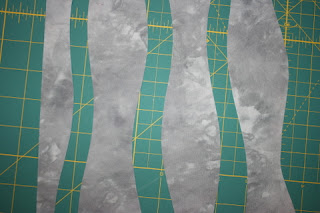 Next I started weaving the horizontal pieces into the vertical strips. I just go ahead and set this whole weaving part up on the batting so when I iron it in the final step...it is ready for the rest of the process without having to pick up the woven piece on its own. You can see the black MistyFuse on the back of the strips that are flipped up ready for the next strip. 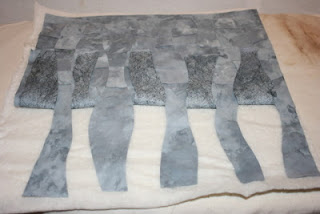 It may be necessary to futz with each strip just a tad to be sure it is in there snugly. 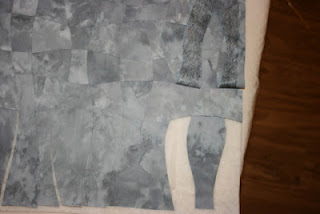 And finally, when all the strips have been woven in (you probably won't have room for the last one or two pieces of your horizontal strips but it doesn't matter).  I iron it to fuse the strips together and the whole piece to the the batting.  I love the subtle play of the color in this muted background which will depict a gray winter day. 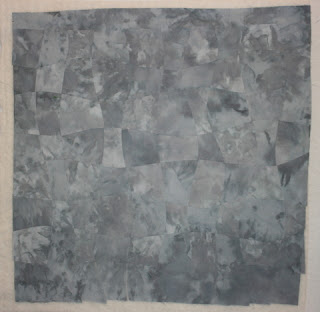 And here is a detail shot. 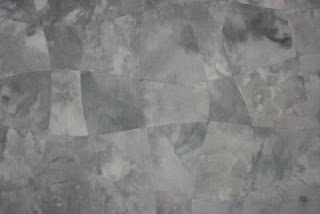 Now it is ready for the tree and the snow!!
Posted by Unknown at 5:48 PM 6 comments:

Well, the Artists' Reception at the gallery is over but the exhibit goes on....until the end of December.

OK....I get to really enjoy this one because it is my very first GALLERY exhibit!  And with other media of art...not just art quilts!

Drove down yesterday afternoon.  I was a bit nervous...I think just because I've never done anything like this and had NO idea what to expect. The big snow wasn't due until evening so we had a great trip down to Zumbrota (about 2 hours from our home).

Have to say...it was really fun to see my work hanging and with all the other artists displays. 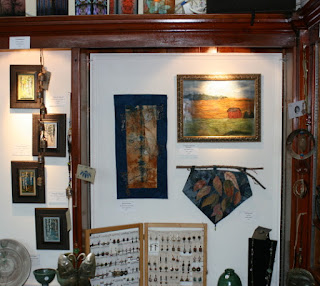 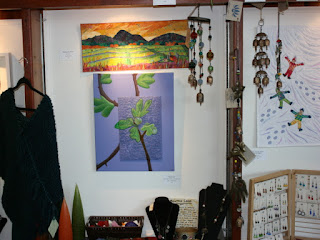 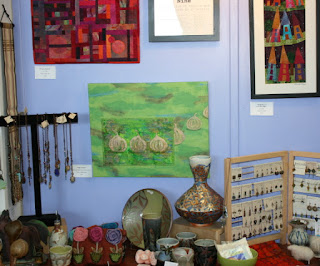 The owner and staff of Crossings Gallery were wonderful to work with and it was a very fun and comfortable afternoon.  Some snacks and some very talented people!  It was fun to meet other artists who work in other medias...AND some art quilters as well. 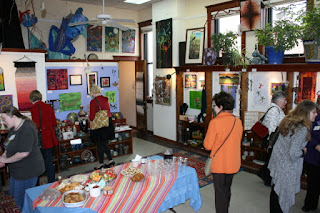 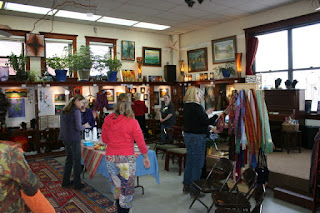 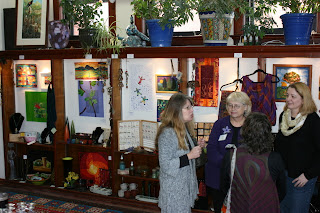 There are two other pieces at the show but they will be displayed when wall space becomes available.

Thanks to all of you who sent good wishes!! Your support means the world to me!
Posted by Unknown at 12:49 PM 5 comments:

I'm so excited! My first Gallery Exhibit!  Five of my pieces from this year are included in the show. (click here - http://www.crossingsatcarnegie.com/page0002.html - to read more about it under the heading Fabrications Nine). Some of you might recognize another name listed in the promotional piece.

While I know most of you won't be able to attend the exhibit, I just wanted to share this with you. But if you COULD attend...do let me know how you like it!!