My Labor of Love

It is finally finished.  A dear friend of mine died in August. Her family allowed me the HUGE privilege of making two baby quilts and a quilt for her husband out of her favorite clothes.  At first I thought it would be so easy because it was just squares of fabric.  However, it got more complicated (and some of the complication I added on myself) because there were big variances in the thickness of the pieces and I also wanted to include as much texture and defining bits as possible....just to make it more recognizable. I also left 4 operational pockets in case he wanted to put a treasure in there or something. Then when I began quilting it (it is 60" X 72") I decided to take a bit of artistic license and quilt into some of the pieces things that reminded me of her, things that meant something to her. While it was difficult at times, I so enjoyed "spending that time with a close friend".  And I was able to complete it in time for him to have it for Christmas - their first without her. Those of us who have lost close family know how difficult a time that can be. I hoped this would be like a big hug for them, wrapped in memories of her.

So here it is - along with a couple of detail photos: 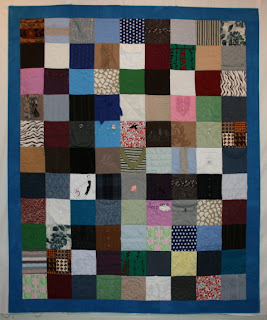 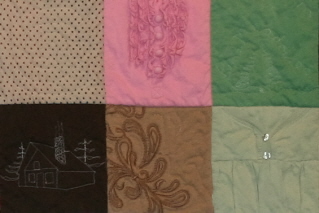 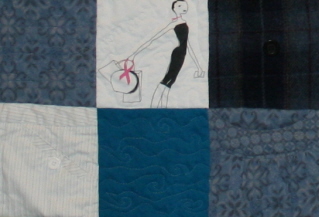 Now on to the two baby quilts! I think they will seem easy after this one. But what a thrill to think of them cuddled up in the "hugs" of their grandmother someday!
Posted by Unknown at 10:26 PM No comments:

I'm still hard at work on the three quilts I'm making for my friend's family. However, in  my continuing quest to bring you amazing works of art from other wonderful artists I am passing along this link. Worth your time to check out!