I received in the mail acknowledgement that my piece "Shattered Lives" has been accepted for the Fiber Arts Festival in Albuquerque, NM. The exhibition runs May 23-25. 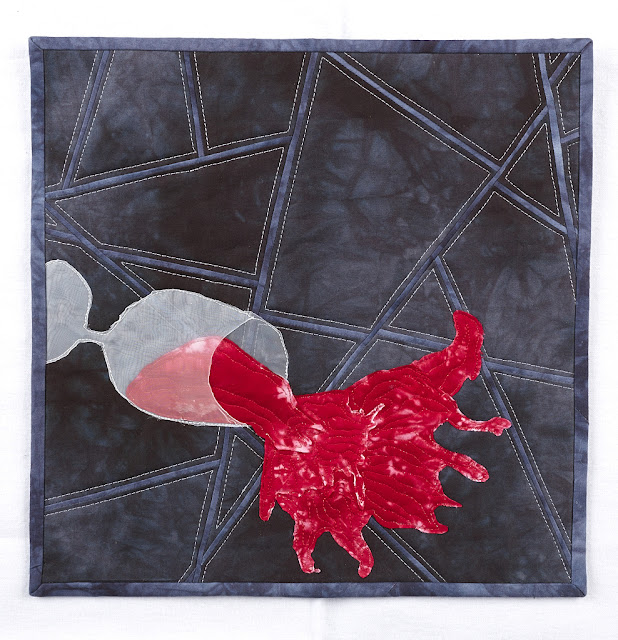 I've had to check the calendar just to be sure, but yes....it is APRIL 20th!!  Wouldn't know it looking outside here.  At first it was funny but now it is just ridiculous.  AND...more snow forecast for Sunday!  I can't say anything else.  The photos will speak for themselves.  These were taken outside our home TODAY!! 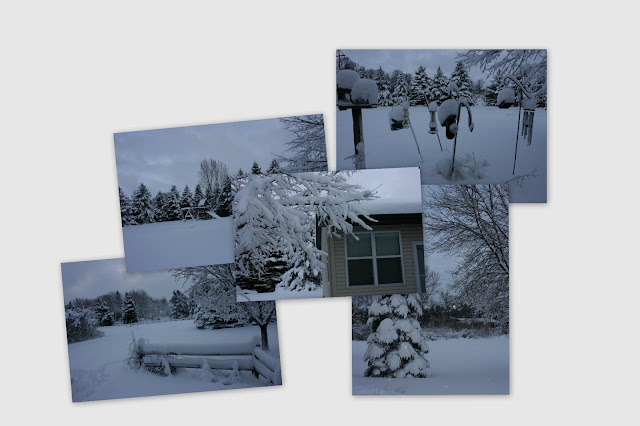 I Would Appreciate Your Vote

While this is also posted on my art FB page...I know some of you won't see that so I'm posting it here as well.

I WOULD APPRECIATE YOUR VOTE! Just today I entered TheArtList Artist of the Month for May. One of the prizes is determined by popular vote. I would appreciate it if you visited the page and voted for my piece "Life Upside Down - And Slightly Off-Kilter" if you like it. It is about the second entry so you might have to scroll down to see it. Thanks in advance!
https://www.facebook.com/TheArtList/app_184343041637133

This is the piece I entered: 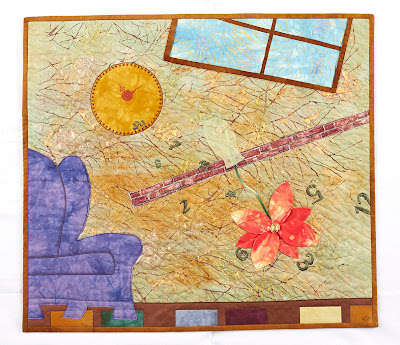 Posted by Unknown at 9:43 AM No comments:

Labels: Artist of the Month, Life Upside Down

Well, it is finally done.
I did two sessions of painted shibori to make the woods. The cut out the two roads diverging. The "leaves" and "branches" were made with a brayer wrapped with a rubber band. I did some additional painting to creat the undergrowth by the road. The black marks on the aspen trees were done with a Pigma pen.

"The Road Not Taken" by Robert Frost is my favorite poem and my life story all rolled into one. It is short so I want to share it after the photo. 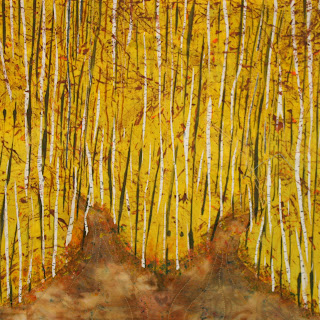 The Road Not Taken
Robert Frost

TWO roads diverged in a yellow wood,
And sorry I could not travel both
And be one traveler, long I stood
And looked down one as far as I could
To where it bent in the undergrowth;

Then took the other, as just as fair,
And having perhaps the better claim,
Because it was grassy and wanted wear;
Though as for that the passing there
Had worn them really about the same,

And both that morning equally lay
In leaves no step had trodden black.
Oh, I kept the first for another day!
Yet knowing how way leads on to way,
I doubted if I should ever come back.

I shall be telling this with a sigh
Somewhere ages and ages hence:
Two roads diverged in a wood, and I—
I took the one less traveled by,
And that has made all the difference.

Prepping Art for Show or Exhibition

Ok, I started out in this art world as an art quilter.  Easy right.  We just sew on a sleeve to the back of the piece and we are good to go.

However, ALL of the shows/exhibitions I've been accepted in this year so far are NOT quilt shows.  All art must arrive ready to hang.  I started out with a dowel rod with eye hooks and picture wire.  While acceptable...I was not complete happy with how it looked and how it hung.  I thought of several options...none of which thrilled me.  But, now I think I have solved my problem.

Today I was putting the finishing touches on a piece to deliver to the 17th Annual Primavera Celebrate Spring Exhibition in Plymouth, MN.  The piece, "Spring Forward", is a 12" X 12" Mixed Media Textile.  I also need to anchor some of the watch mainsprings and this method helped in that regard as well.

Here are the steps I took to make it work.

First, I found a complimentary textile, cut 4 strips and hand stitched them to the four sides of the finished and bound piece. Then I placed it on a 2" deep 12" X 12" canvas purchased at JoAnn's.  I wrapped the sides around and stapled them to the back of the canvas frame.  I LOVE IT!!!!!! 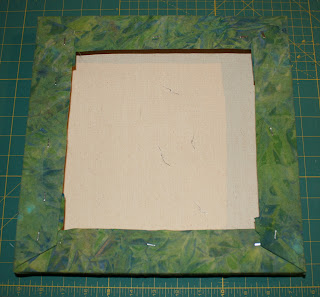 I took one strand of light weight picture wire, threaded it through a needle and stitched down some of the strategic parts of the metal on the art work. I found it very useful to use a small pliers to pull the wire through both the art and the canvas.  The wire is slightly visible on top of the mainspring, so I just took a black Pigma Pen and colored it so it wouldn't show. 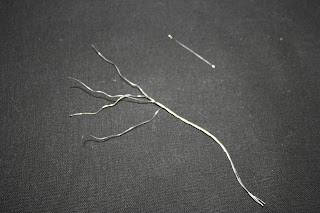 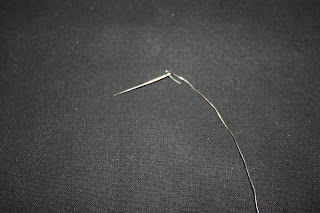 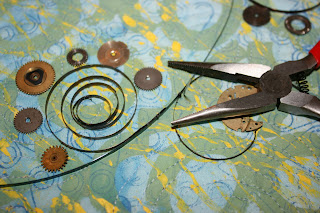 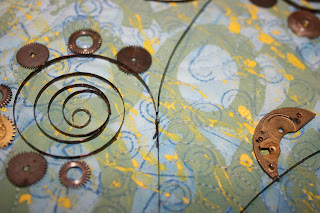 I trimmed the wires even though they won't show. (If you are anchoring metals on textiles or art quilts, you can do this same thing using the art layer and the batting. Then the anchoring wire would be hidden when adding the backing)

Next I prepared the backer board. I used thin cardboard from a multi-pack snack box.  I cut it 1"- 1.25" smaller than the measurements of the canvas.  (so this was cut to 10.75").  Then I took some white easel paper and wrapped the coardboard, securing it with painter's tape.  The staple gun then attached it to the back of the canvas frame. 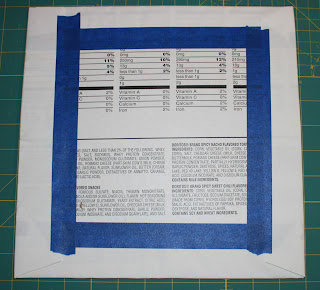 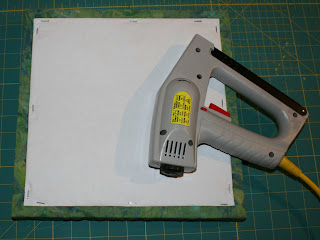 Now for the finishing touches.  I covered the staples with some paper tape. Attached the hanging hardware. And finally, added the label with the name of the art work and my name.  The QR code is my name, address,  & phone. 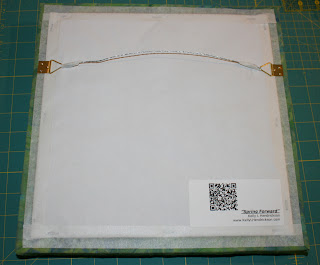 ﻿﻿Here is a side view so you can see how the piece looks wrapped on the canvas. 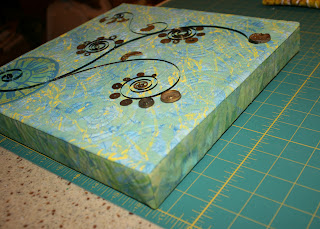 All that was left then was to package it up and deliver it!

I think this is a MUCH better way to present textile work for a show that is NOT primarily (or at all) quilt related.

It's All In The Timing

Don't you just love it when Serendipity strikes and things just fall into place?

I just had an experience like that.  One of the challenge groups I participate with has a theme for March of POEM.  Well, my favorite poem (and life inspiration) is the poem "The Road Not Taken" by Robert Frost.  As I live in Minnesota...a yellow wood is naturally aspen or birch.  Now....how to make the trees in the woods....

SERENDIPITY!!  On one of the many artist blogs I follow, an artist did a demo on painting shibori. Now...I had done painted shibori before but for this application it just didn't come to me naturally. Now if only I could remember the artist who did the demo. I'm searching for her and when I find her, I'll edit this post to include her name (if any of you who follow this blog know whom I talking about...please post it in the comment section and I'll be sure to include it in this post)  (Credit where Credit is due....this demo was done by Vivica on Quilting Arts. Here is the link: http://www.quiltingdaily.com/blogs/quilting-daily/archive/2013/03/28/paint-a-shibori-forest.aspx   Thank you Beth!!)

I dyed a piece of fabric with an appropriate sunny yellow and then wrapped it around a large PVC pipe. The next step is to wrap the string around the fabric and scrunch it down the pipe.  For the first layer I painted the ridges with a dark gray.  Took the fabric off the pipe, laid it out straight and let it dry overnight.  The next day I repeated the process but used slightly wider wrapping of the string and painted the ridges with white. For the "leaves" I used a brayer wrapped with rubber bands with brown and orange acrylic paints.  Here is the result: 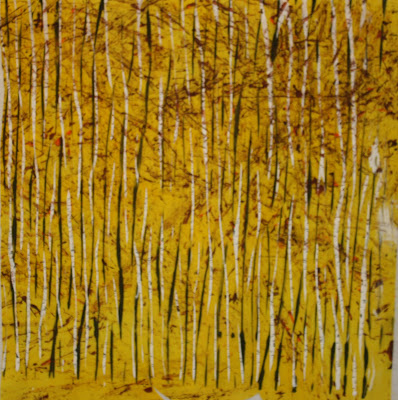 ﻿Now on to finishing it.  Putting in the diverging roads has been a challenge but I think I have it now...all I need to do is complete it!

I'm linking this post to Nina Marie's Off The Wall Fridays...

Beginning this year of 2013, I set myself a goal to participate in 10 juried shows/exhibitions.  I was counting the show I was in for December 2012 just because that is when I really started to pursue this goal in earnest.

Well, yesterday I received a phone call that a gallery show wanted to accept a couple of my pieces.  THAT show brought the total count to TEN!!  I hadn't expected to reach this goal that soon but I am very excited that it has all worked out this way!  That doesn't mean that I won't be entering shows and exhibitions the rest of the year. But I do plan to cut back on such an aggressive plan of action.

Blue Door Gallery in Yonkers, NY had a call for artists to enter their who entitled "Lost and Found in Yonkers". It is for artists working in Mixed Media, Assemblage and/or Collage, containing found materials.  Well...I obviously couldn't pass this one up!!  Below are the two pieces they accepted for their show. 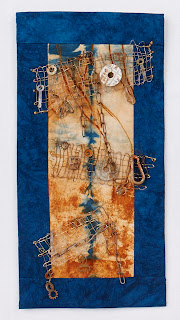 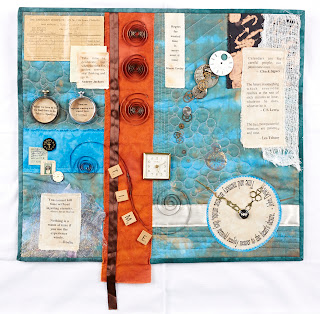 Now on to one of my other goals for my year of "Investment" in my art career.  I am working on three series to develop a body of work.  This is all with the goal in mind of having my first solo show in 2014.  Not having to concentrate so much on entering shows will free up time desperately needed to accomplish the next phase.

And again, I want to thank all of you who have been such a wonderful support and encouragement as I work toward my 2013 goals.  I appreciate all of you more than I can say. ﻿
Posted by Unknown at 11:34 AM 3 comments: